We visited Jayne Moore of Moore Media in Liverpool to find out how Rutherford Direct protects her workforce and its loved ones against the condition people fear the most…cancer. Providing up to £1m of yearly treatment cover and an extensive support package per employee, Rutherford Direct is now a key part of the employee benefits on offer at Moore Media. See how cancer cover can provide peace of mind to your workforce.

Moore Media is one of the first businesses in the UK to adopt Rutherford Direct’s Cancer Cover for businesses, but at the heart of that decision is Managing Director, Jayne Moore, who is a cancer survivor and knows better than anyone that having access to the best care can mean the difference between life and death. Here Jayne, 49, from Liverpool, tells her story:

“I was working in sales and marketing at a radio station in Lancashire when I started to feel unwell. I had chest infections and flu symptoms continuously, but it was always brushed off as nothing serious by GPs. So I began to try to cure myself by having a series of therapies, including lymphatic drainage and reflexology, but nothing worked. It started to get worse, I would wake up with a puffy face, and I began to lose my voice for long periods. When I was running meetings, my larynx would become paralysed, and I would start coughing. I began to feel like a failure at work. I had to take time off, my health affected everything that I did, and I knew in my heart that after four years of being unwell it was more than just a sore throat or a cold. 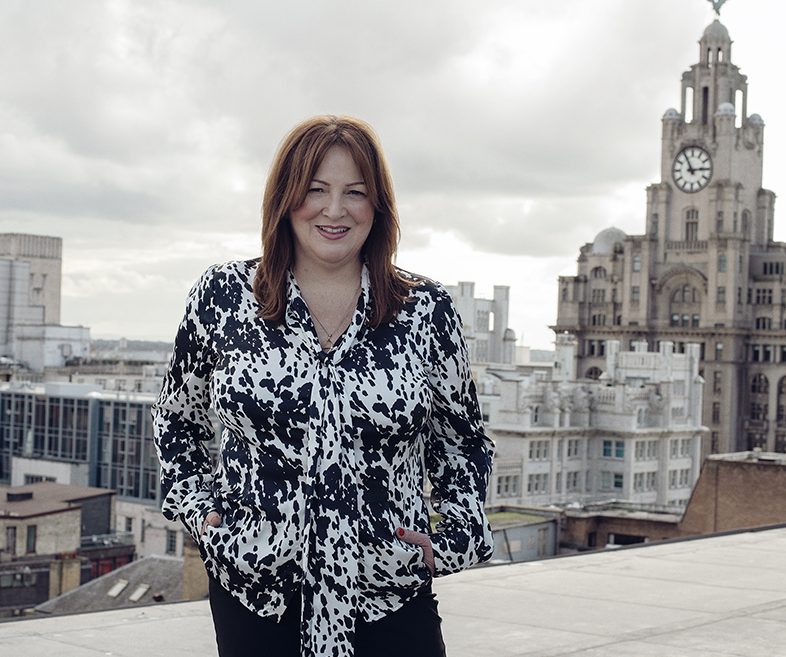 “At that time when I went to my GP surgery, a locum was covering, and she said: “Losing your voice for 12 weeks is not normal, we need to do some tests and find out what is going on.” She gave me an emergency referral. I began kicking myself as I had recently changed jobs and no longer had health insurance and was concerned if it was something serious how long I would have to wait to be treated. But I was lucky, this was 2005 – 15 years ago, and cancer care then on the NHS was very different from today. I was fast-tracked to The Liverpool Heart and Chest Hospital to a cardiothoracic surgeon. I had a day of tests, scans and X-rays. At the end of all of that, the surgeon Mr Paige, called me in and said he had seen something he believed was a tumour. I was filled with dread – we had cancer in our family, my brother had died of cancer, and that had devastated all of us, and then my sister, who thankfully had survived cancer, and now me.

“I knew that whatever was going to happen I had to face it head-on and I said: “Right Doc, what are we going to do about it, what’s the plan?” He told me that he’d never seen anyone react to a diagnosis quite as I had before, but I knew I had to deal with what was ahead with a positive mindset and beat it. I was put in the only bed available in a private wing for a biopsy to find out what was going on. A large B cell lymphoma was discovered – it was in an awkward place around my arteries in my chest. They had to go in through the throat to look at it, and I was diagnosed with Non-Hodgkin’s lymphoma, a rare form of blood cancer. I desperately wanted to have a child with my partner Max. I asked if I could freeze my eggs – I’d read about Kylie Minogue who had been speaking about preserving fertility like this at the time. I thought by having treatment that I might lose my fertility and the chance to be a mother. My consultant, Prof Pettit told me sternly that I didn’t have time for that. I was told that without treatment, I would not see out 12 months. My coping strategy was humour and keeping busy, so I said: “Ok Max, let’s get a second dog instead.” I was also renovating my house at the time. I knew if I was going to be sick, I needed to get it finished before I started my treatment, so in two weeks it was finished with a little help from lots of friends.

“It was a bleak diagnosis, and I couldn’t help but think about my brother George, who had been taken by cancer at the age of 39. It was the most devastating thing I have had to deal with, he didn’t tell any of us he was dying. Being told I might die was terrifying, but I didn’t want the fear to rule me and the way I coped with it was to say that ‘this cancer wasn’t mine to keep, it was just on loan to me for a while, but I would be giving it back.’ I realise now that I had a survivor’s mindset. At this time, I was also under pressure at work, and I couldn’t work. They stopped paying me. It was down to the team at Liverpool Cancer Support Centre (now called Sunflowers) where I got help. I had always worked and never been on benefits before – this was the darkest part of the experience for me.

“On June 3, 2005, I started my first round of chemotherapy, which lasted for six months. I had one month of radiotherapy – they were tough times. I was neutropenic at one point and very ill, but I was in remission less than a year later. I got the all-clear on May 6, 2006 – the day I became cancer-free – which was terrific news. Max and I got married on September 1, 2007, in St George’s Hall in Liverpool. Less than eight months later on April 30, 2008, my beautiful daughter Georgia was born four weeks premature – it was terrific as my fertility hadn’t been affected, and life was good.

“Having had no support from my employers during my cancer treatment, I vowed to never work for anyone again, and I started my first business while still bald! I knew that I would not treat my employees the way I had been treated. Being so ill yet still under so much pressure made me feel like a failure, and I wanted to ensure that I looked after my staff when I had employees. Sixteen years ago, I was given the best care. The system has changed due to Covid 19. The NHS is under such pressure today, and I can honestly say that if I had cancer again, I often think, ‘would I cope as well as I did then today?’ For me the diagnosis was one thing, having the cancer diagnosis and told I had 12 months to live, there is a lot to take in with that, but at the same time my employer was unhelpful and not able to offer a great deal of support.

Meet Jayne of Moore Media in Liverpool to find out how Rutherford Direct protects her workforce and its loved ones against the condition people fear the most…cancer.

“As soon as I found out that as a cancer survivor of more than ten years that I would qualify for Rutherford Direct Cancer Cover, and that I could also cover my staff at my media agency, Moore Media, based in Liverpool, I was over the moon. Times are tough for all of us now, but 2020 has shown us that good health and peace of mind are the most important thing. As a business leader, I want to be a trailblazer with this innovative move to show my staff how much I value them.

“The whole point of taking Rutherford Direct Cancer Cover for me gives me peace of mind that if the cancer comes back, I will be given priority treatment by Rutherford Cancer Centres. I’ve got an income benefits package there as well. Still, it’s not just about me, this is about my amazing team, to ensure that if God forbid, they ever have to face such a dark day, I can offer them the very best care available for cancer treatment once they have a cancer diagnosis. As an employer, I understand now there are choices that you never want to have to make when it comes to looking after your loyal people, I only want to always provide the best support that I can. With Rutherford Direct I can do that for the entire team.

“To have that peace of mind, to know there is a benefits package in place, is important to me and my family and my team and their families if they want to be added. For me, it’s the equivalent of taking the team out for lunch, in the scheme of things it’s nothing, in terms of cash flow it’s a no brainer and in today’s world where looking after each other is crucial, the health of my team is priceless.”

Want to learn more about how you can protect your future from cancer?

Visit our Individuals & Families page to get further details today!

Want to learn more about how you can protect your employees from cancer?

Visit our Companies & Groups page to get further details today!

Get in touch today!

Rutherford Direct is an affordable membership plan that pays for the cost of comprehensive cancer treatment for you and your family, or for your business and employees. Call us today on 0800 056 3203.

A membership plan with comprehensive and dedicated cancer cover with access to the latest pioneering oncology treatments including proton beam therapy.

Get a Quote Today